Are Breakthroughs a Matter of Luck? Part I

This article presents a dilemma for me. My commitment here is to give you a new perspective on problems and disruptions. In many respects, America is a country that is dedicated to finding ways around problems and avoiding inconveniences, and that culture affects our lives and business. We accept the way we are or how we interact with our environment primarily because it’s convenient, and change requires risk. For this moment, I encourage you to forget this way of thinking. I invite you to completely alter your relationship with problems and see them as empowering.

My message here has nothing to do with simply turning your problems into opportunities. Instead, I am asking you to intentionally create problems in your life or organization in a way that gives you a new way to dramatically change status quo. Whether you want to build the next I-pod or simply be a healthier person, consider that you have to go through a significant disruption before you can envision a breakthrough or new way of thinking. Over the course of this series, I will show you how to create the right problems.

As a caveat, these problems should and will be big enough that you require support from others. With the right foundation, however, you are more likely to keep your focus on the outcome and less likely to be derailed from accomplishing the breakthrough.
Read more »
Posted by Ted Santos at 12:55 PM No comments:

Are Breakthroughs a Matter of Luck? Part II 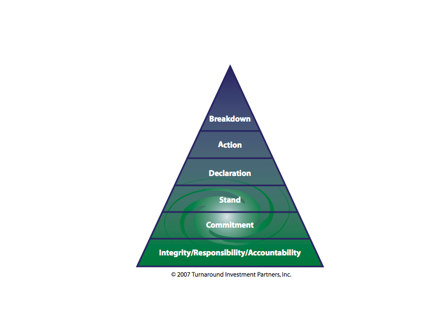 To distinguish the method for creating breakthroughs on purpose, it will be important to look at the pieces of the puzzle.  However, first let’s understand why it is called disruptive.

Most breakthroughs are initially destructive or counter-intuitive to the normal functioning of the organization.  It requires people to think and do things differently.  Perhaps that is the reason most companies avoid breakthroughs.  Disruptions are problems if you are not skilled at managing yourself and others.  It is the reason they are not a matter of luck.  Without structures to support breakthroughs, they just look like problems.  And most people just want to get rid of problems.  Therefore, there is a certain mindset needed to effectively manage breakthroughs.

Are Breakthroughs a Matter of Luck? Part III 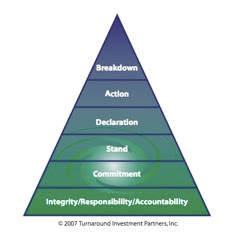 As you move through the Disruptive Leadership Model™, it becomes clear that the process quickly shapes mental models in the direction of high performance. It allows you to more effectively gain insight into what you really are committed to accomplishing as well as what stops you from getting it done.

From experience, the vast majority of business leaders have a vision that they would like to pursue. Except, they feel it is not the right time; the economy is wrong; their people are not ready; they don’t have resources…etc.  When people or companies are able to get clear about what they are committed to accomplishing and become comfortable declaring a future that currently does not exist, it is easier to develop plans and strategies.

The empowering part of this method is that it allows for people and organizations to be comfortable with the breakdown that declarations create.  The moment you declare a future that has never existed and stand for it to happen, you have created a problem, and it is likely that you do not immediately have all the answers that will help take you to where you want to be.
Read more »
Posted by Ted Santos at 12:52 PM No comments:

Is This a Repeat?


Some people say Occupy Wall Street is similar to the protests in Egypt. That’s unfortunate. At one time, the US was known as the country of pioneers. We were first and the best at everything. Does this mean we have been converted to “me too?”

When I hear the interviews of the people protesting Wall Street, I see similarities to the protests of the 1960s. While the ‘60s represent a significant time period in US history, the revolution lacked responsibility. It was almost an excuse for being promiscuous and experimental with narcotics. It was all done in the name of being against the system.

So are the Wall Street protests a remake of the ‘60s? Or are they a copy of Egypt and Great Britain?

The movement, if it can be called one, is revolutionary in many ways. As our social and cultural values change as a nation, it is undeniable that the entities governing them must change, as well. The question remains, however, as to what changes are these protestors seeking and what changes will be in the best interest of the country.

Unless a clearer mission evolves, protestors may not receive anything for their actions.  If a common pattern amongst them does not emerge for whom they have distinguished as the perpetrators – government or corporate America, they may eventually be ignored.

It is rare to find individuals with the laser focus to fulfill their goals. Politics aside, it seems the so-called 1% has the laser focus to get what they want.  If you observe and listen to the protestors, that lack of clarity is apparent in their demonstrations.  What do they want?  The fact that they are protesting shows that there is a personal unhappiness with their lives or careers, and this lack of clarity is a possible cause for this dissatisfaction. It’s reactive, rather than proactive. At the same time, I cannot deny that the fact they are taking action to develop the laser focus for what they want has power. Except, it will be a challenge – they will certainly have to make a commitment, negotiate, and compromise in order to find a new way of thinking that can address everyone’s needs.

I know transformation requires responsibility.  Without it, people resort to blame. Once those “Occupiers” can articulate what they stand for and the new future they are declaring, and organize the means to achieve it, we will see the potential for breakthrough change and disruption of the modern corporate world.

This can happen in the same way we saw Dr. Martin Luther King. He stood for something. In Egypt, they also made demands and stood for something. If the Wall Street protestors do not get clear about what they would like to see happen that is not happening, they will follow the fate of the protestors of the ‘60s. If you look closely, some of those people are now part of the 1% on Wall Street.

Posted by Ted Santos at 7:08 PM No comments: