Do Politicians Matter for the Average Man in America? 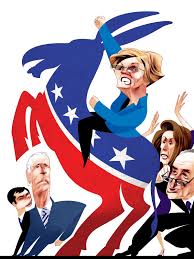 On Capitol Hill, the movers and shakers are the elite power brokers or grass roots organizations. They are the ones who give marching orders to the legislators.  To this day, the Capitol Hill ecosystem consists mostly of men.  At the same time, while men have built the Americas over the past several hundred years, they have

become disposable. There does not appear to be representation for the average man even though he built the nation.  When you look at family and divorce courts, you see men have become a utility.  And women are the beneficiaries of their utility.
Yet, the US is called a democracy.  That is supposed to be a government for the people.  As men continue to build, maintain and protect the nation, the laws should be there to ensure their well-being.  However, that does not appear to be happening.  There are millions of men who will never find a job because there are not enough.  Because of outsourcing, low wage workers, technology and women filling the workplace, men do not provide much value beyond the military.  In addition to military, men fill all jobs that are too dangerous for women.
In the past, men have built every civilization from top to bottom.  While they did that, women played a support role.  Today, women want to be in charge of building, maintaining and protecting civilization.  Except, they don¹t seem to want support from men.  In fact, they have not thought about what to do with men aside from extortion in divorce and family courts.  At the same time, women still demand men be providers and protectors.  If you take most men out of the workplace, how will they provide? Can financially distraught men protect?
What is this new civilization where the builders have become the enemy and outcasts?  Do politicians understand the long term consequences of locking men out of the workforce?  If men are not in the workforce, what role will they play in society?  Are they to become the homemakers?  Do women desire
stay at home men?  Have men stood up for themselves?  Or are they expecting women to do it for them?
As men and women, let¹s discuss this complex dilemma we have created.  Join the discussion.
Tonight, Sunday, October 11, from 7:00pm-9:00pm (EST) at Straight Talk with Ted Santos.
To hear the show live:
https://www.blogtalkradio.com/ted_santos/2020/10/11/do-politicians-matter-fo
r-the-average-man-in-america
Call to comment or ask questions live at: (323) 642-1387.
Share this post and invite your friends to this thought provoking discussion!
Posted by Ted Santos at 5:54 PM