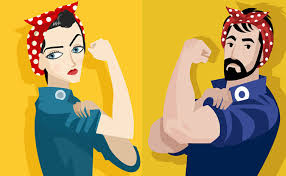 Some may say oppression is because of patriarchy and capitalism.  Except, global trade has existed for thousands of years.  Europeans traded with Asia and even the Americas.  Leif Erikson came from Greenland to the Americas in 992.  Local and international trade is based on having something of value that another person wants.  That same principle exists when you get a job.  The more value you produce the greater the reward.

Why would women be against this system?  Even if a woman is a stay at home mother, she is rewarded with a lavish lifestyle if she chooses a great husband and knows how to support him to be successful.

If a woman chooses a man who has not trained himself to be valuable, she will be in a lower class.  On the other hand, if she finds a man with high value and does not know how to support him, she could be a distraction that causes his value to be reduced.

For some reason, women believe this system is failing.  Women believe they should be given a job even if she does not bring the same value as a man.  That is called entitlement.  Then they say they don’t need a man.  However, the jobs they want are in companies created by men.  For those women who don’t want to work, they can have children and receive minimal financial support from the government.  The next level is to marry, divorce and take half.

While many women use these strategies, they are not looking at what’s in the best interest of the nation, tribe or family. They divorce men and use the children as pawns to extort the man.  They sue companies who will not pay women equally, even though studies prove that men work longer hours and therefore more productive.  That is not counting the risks men take that women will not.  Risk taking is an important part of business and commerce.

Are women claiming this system of patriarchy should be flushed down the toilet for a matriarchy?  From what we have seen, the tactics women employ do not build.  They employ entitlement and destroy, even the children.  Perhaps the only way patriarchy has failed is because they have given women rights of any kind.  If that is incorrect, show me the history books that prove women have built great civilizations without men.

To hear the show live: https://www.blogtalkradio.com/ted_santos/2020/09/06/is-patriarchy-failing