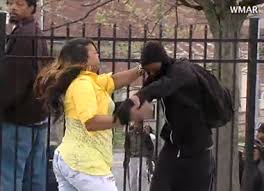 Women initiate an enormous amount of violence on men and boys.  As men, we keep our lips sealed.  We have been indoctrinated with the belief that it is improper to discuss bad behavior by women.  We are charged with the responsibility of protecting women, no matter what.  Silence about the violence we endure is one way to protect women.  That silence can create
resentment.  That bottled up resentment can come out in ugly ways.

Recently a 20 year old woman recorded her boyfriend telling her he was going to shoot her.  Minutes after making that recording he shot her.  How could a boy raised by a mother commit such a heinous crime against a woman?

This is the conversation society has been sweeping under the rug for eons.  Psychologists say a child’s personality is developed by age two.  By age 10, most of a child’s philosophies and behaviors will remain the same throughout adulthood.  During the first 10 years of a child’s life, he spends more time with his mother.  Therefore, he has a greater influence from mother than father.

If this is the case, why are some boys excessively violent?  Some say it is because their father is violent towards the mother.  Is that true?  According to the Harvard Medical School, women start 70% of domestic violence.  In addition, many children are raised in single mother households.  Of the 27 mass shootings committed by boys or men, 26 came from single mother households.

At some point, we have to start asking: what is happening between a boy and his mother, such that, he believes raping, abusing or killing a woman is acceptable?  It would seem that all mothers are teaching their sons to love and respect women.  Because men are becoming more violent in society, we have to ask how the mother is influencing her son.

Some women believe they have to use excessive force with their sons to discipline them.  Furthermore, some single women resent the father of their son because the relationship did not work out.  That resentment can be taken out on the son.  In other cases, women have a string of bad relationships with men.  Her dissatisfaction and anger with men can be directed towards her son because he is a man as well.  How to boys internalize that excessive force?  Men and boys do not like being beaten by girls or women.  Psychologically is can create resentment.

If we are to change this dynamic, we must first discuss it.  Join us for the conversation no one wants to have.  Together we can find solutions.

To hear the show live: https://www.blogtalkradio.com/ted_santos/2019/12/02/are-mothers-making-their-sons-violent