Can Love Relationships Ever Return to What They Used to Be? 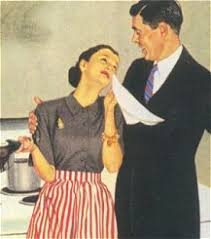 Many people reminisce about the good old days.  Even US presidential campaigns have been created about how great things were in the past.  When it comes to relationships, many women believe men were men, back in the day.  They were
manly and rugged.  At the same time, men believe women were more loving, affectionate and lady-like.

Yet, women have demanded men adjust to the 21st Century woman.  That means she is tough, independent, has her own money and job.  And she makes it clear that she does not need a man for a happy and successful life.  Furthermore, because she is self sufficient, she does not have to play the role of the 1950s woman.  In fact, today’s woman looks down on the women of the 50s.  Those were the days of subservient women who catered to a man’s every need.

At the same time, this independent woman wants the war hero who returned from WWII and the Korean War.  Those were the men who took a stand for what was good, put their lives on the line and defeated evil.  When they returned home, they put the same care into their family.  As a result, a woman felt assured she and her family would be safe.  On top of that, she did not have to work.  She and her friends had the luxury of being stay at home mothers as their men went into the workforce to bring home the bacon. 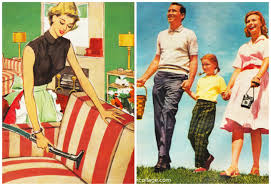 That feeling of safety allowed her to be a loving and affectionate wife and mother.  While being a mother has demands, her job could be done from the comfort of home.  If she was ambitious, she attended social events with other women.  Together they would network and provide behind the scene support for their hard working husbands.  They would make connections for their husbands to acquire new clients, investors or new jobs by befriending women who were married to other successful men.  Because she was a great cook and gracious and well-mannered host, she would invite her new friends for dinner.  There the husbands would expand the bond and become business associates – client, investor, banker, boss, etc.  Those were the good old days.

Today, women find this kind of life boring.  They would prefer daycare centers to motherly parenting, microwave dinners over home cooked meals and competition against other men instead of being a valuable partner.

Women have experienced so-called freedom and they believe staying at home is prison.  As they venture out into the workforce, they return home exhausted and moody.  The love and affection that was once given by their mothers and grandmothers is a forgotten memory that men have no right to demand.  If they do, they are called misogynists.  As a result, many men are walking away from marriage and relationships all together.

Where do we go from here?  This is a great conversation to end the year with.  Can we create a new paradigm for relationships in 2020?  Join us!

To hear the show live: https://www.blogtalkradio.com/ted_santos/2019/12/30/can-love-relationships-ever-return-to-what-they-used-to-be