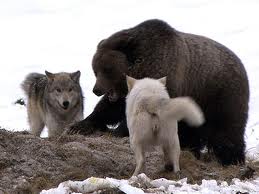 Titans throughout understand this concept. Andrew Carnegie, Henry Ford, John D. Rockefeller, Steve Jobs, Richard Branson, Warren Buffet, Bill Gates. Each of them surrounded himself with effective and powerful people. Without their companions, they would be nothing.

Rockefeller once hired
an attorney who opposed him in a court case. He thought the lawyer was so strong and effective at standing up against him that he thought it wise to have that man on his side.

Carnegie knew almost nothing about producing or marketing of steel yet built the greatest steel company of his time. He recognized people who were capable and became known for developing those around him, instead of buying ready-made talent.

Ford was called a quiet, shy man. It was his wife who empowered him and brought out the greatness we know him to be.

Each of these men held relationships with extraordinary women who were harmonious in mind and spirit with them. They depended on one another.

What pack are you building, such that you and your pack are known for being the best in your industry?
Posted by Ted Santos at 10:57 AM